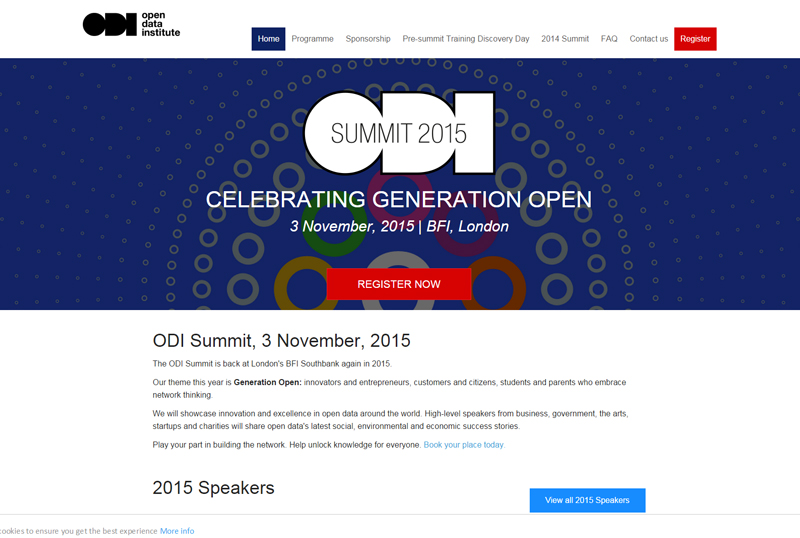 The ODI Summit is back at London's BFI Southbank again in 2015. The theme this year is Generation Open: innovators and entrepreneurs, customers and citizens, students and parents who embrace network thinking. Innovation and excellence in open data around the world will be showcased. High-level speakers from business, government, the arts, startups and charities will share open data's latest social, environmental and economic success stories. 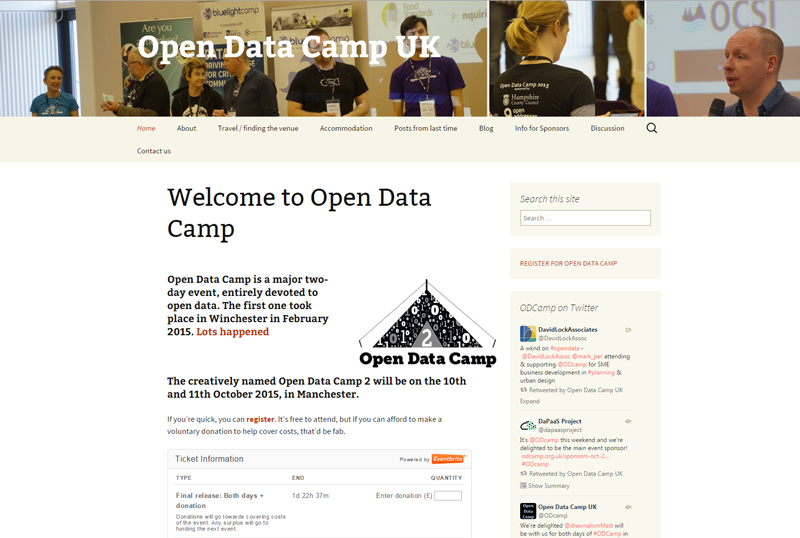 Open Data Camp is a major two-day event, entirely devoted to open data. The first one took place in Winchester in February 2015. 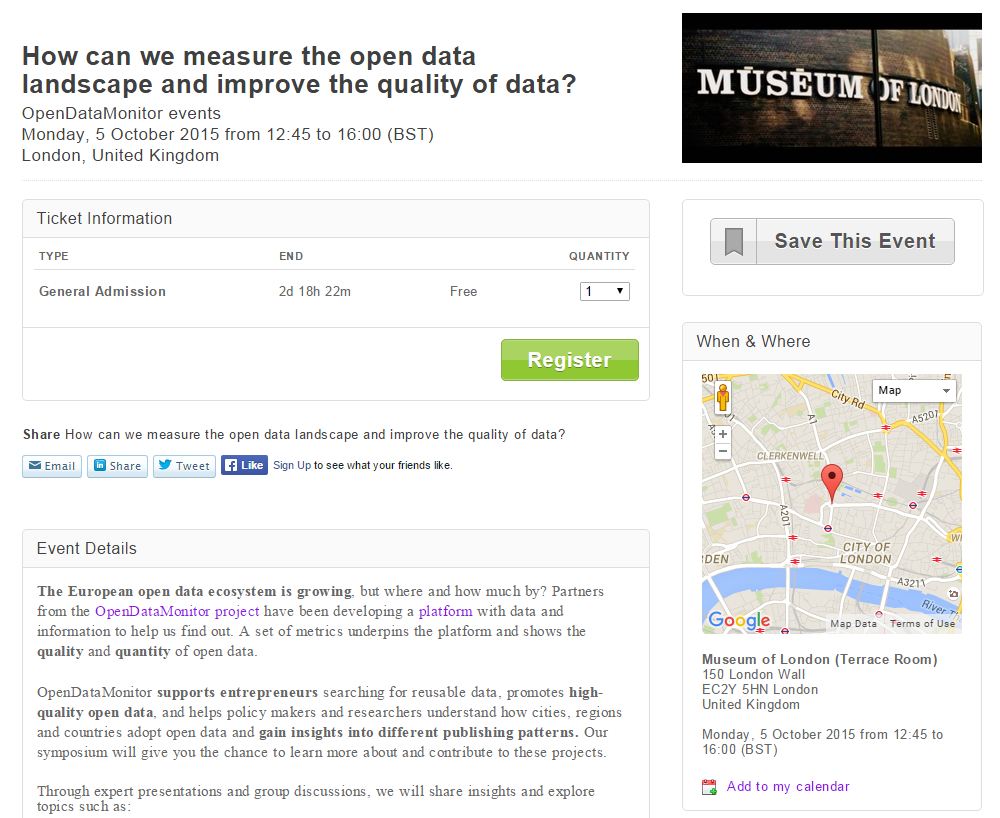 ODM 2015 - How can we measure the open data landscape and improve the quality of data?

ODM 2015 - How can we measure the open data landscape and improve the quality of data?

The European open data ecosystem is growing, but where and how much by? Partners from the OpenDataMonitor project have been developing a platform with data and information to help us find out. A set of metrics underpins the platform and shows the quality and quantity of open data. OpenDataMonitor supports entrepreneurs searching for reusable data, promotes high-quality open data, and helps policy makers and researchers understand how cities, regions and countries adopt open data and gain insights into different publishing patterns. Our symposium will give you the chance to learn more about and contribute to these projects. Through expert presentations and group discussions, we will share insights and explore topics such as: - What is OpenDataMonitor and what have we learnt? - How can we measure the quality and quantity of open data? - What tools, platforms and services help open data professionals understand more about how the landscape is developing? - How can we use this research and findings to shape improvements to data quality and quantity? - How can we take this work forward after the project is complete? 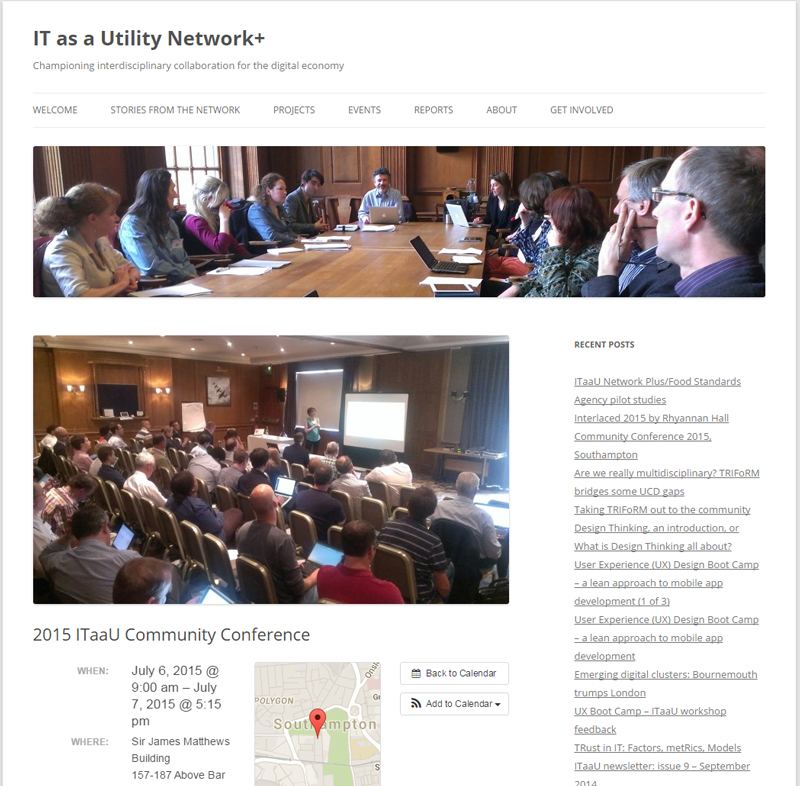 The ITaaU approach to the Digital Economy has been to foster interdisciplinary interaction, research and understanding. This has led to a fascinating collection of clusters of activity in libraries for the future, security of information in the food chain, the importance of trustworthiness in IT utilities and the crucial role of design thinking in all aspects this convergence. This second ITaaU community conference will build on all of these activities that have unfolded across the Network and anticipate the many opportunities and challenges that lie ahead. The Network has always sought to connect with academic researchers in universities, innovative thinkers in commercial organisations, and enlightened policy makers at all levels. 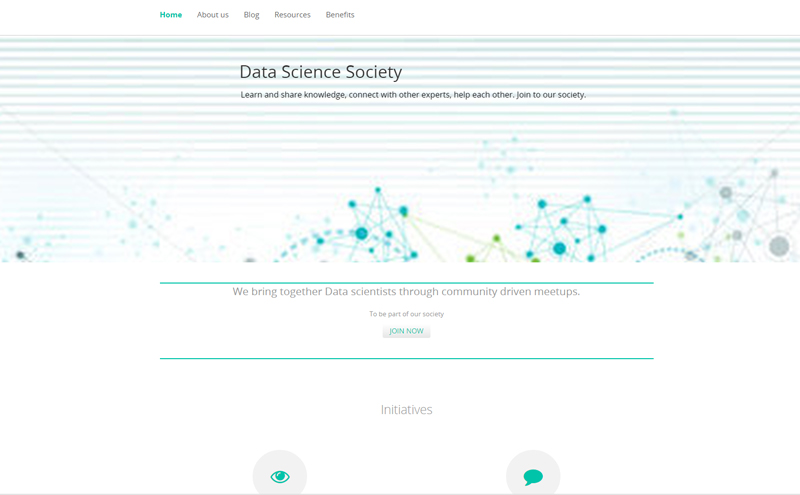 To continue the series of joint meetups this time Data Science Society meets the Open Data and Linked Data Meetup organized by Ontotext for an event hosted by Telerik, a Progress Company! Speakers are Dimitris Kontokostas - one of the leading researchers in the area of Linked Data and knowledge graphs, CTO at DBpedia and part of the Agile Knowledge Engineering and Semantic Web (AKSW) Research Group team in Germany and Vladimir Alexiev, PhD, PMP - one of the leading experts at Ontotext in the area оf ontology engineering and Linked Open Data, developing BG DBpedia. 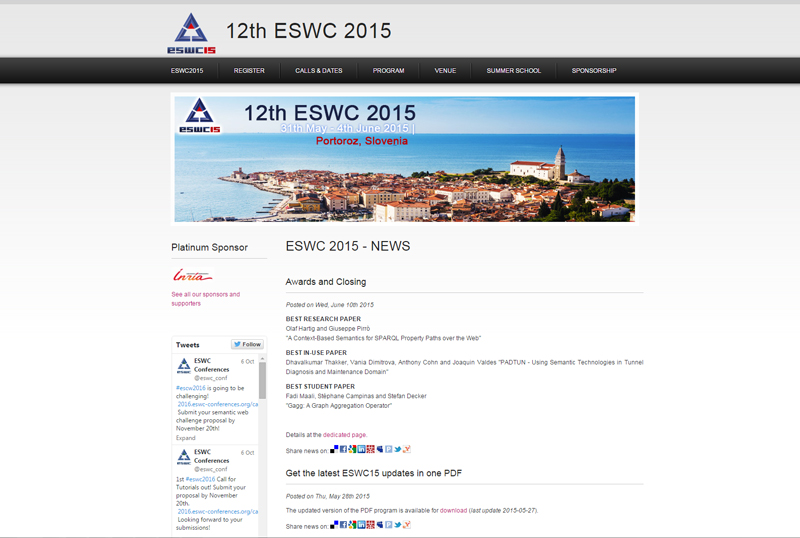 The ESWC is a major venue for discussing the latest scientific results and technology innovations around semantic technologies. Building on its past success, ESWC is seeking to broaden its focus to span other relevant research areas in which Web semantics plays an important role. ESWC 2015 presents the latest results in research, technologies and applications in its field. Besides the technical program organized over twelve tracks, the conference features a workshop and tutorial program, system descriptions and demos, a posters exhibition and a doctoral symposium. 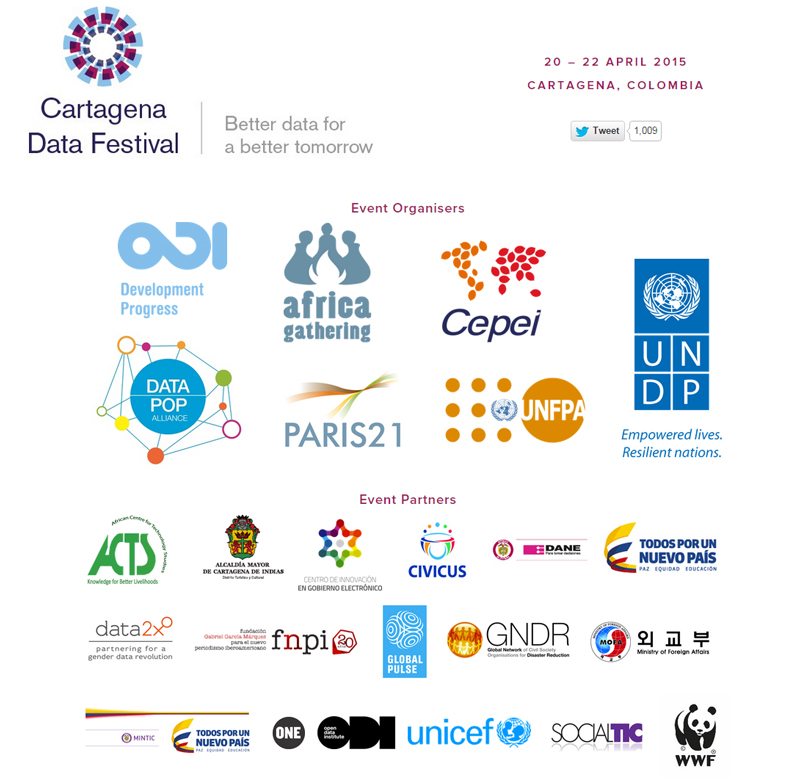 The Cartagena Data Festival, a three day festival in Colombia, is being organised by ODI, Africa Gathering, CEPEI, Data-Pop Alliance, PARIS21, UNDP and UNFPA. The event will focus on solving critical gaps in coverage, access and analysis of data, thereby contributing to the global effort to drive progress in the post-2015 agenda. Conference objectives: • Drive the changes that are needed to advance a data revolution by bringing together the people and organisations whose innovations, resources, expertise and influence can make them happen • Develop concrete solutions and practical tools to produce long term and sustainable progress through a data revolution • Build the ideas, innovations and partnerships needed to monitor the sustainable development goals 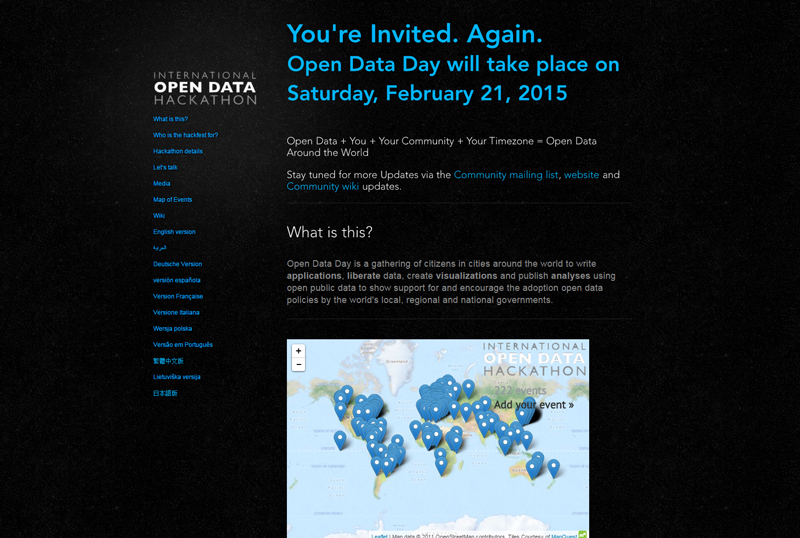 Open Data Day is a gathering of citizens in cities around the world to write applications, liberate data, create visualizations and publish analyses using open public data to show support for and encourage the adoption open data policies by the world's local, regional and national governments. 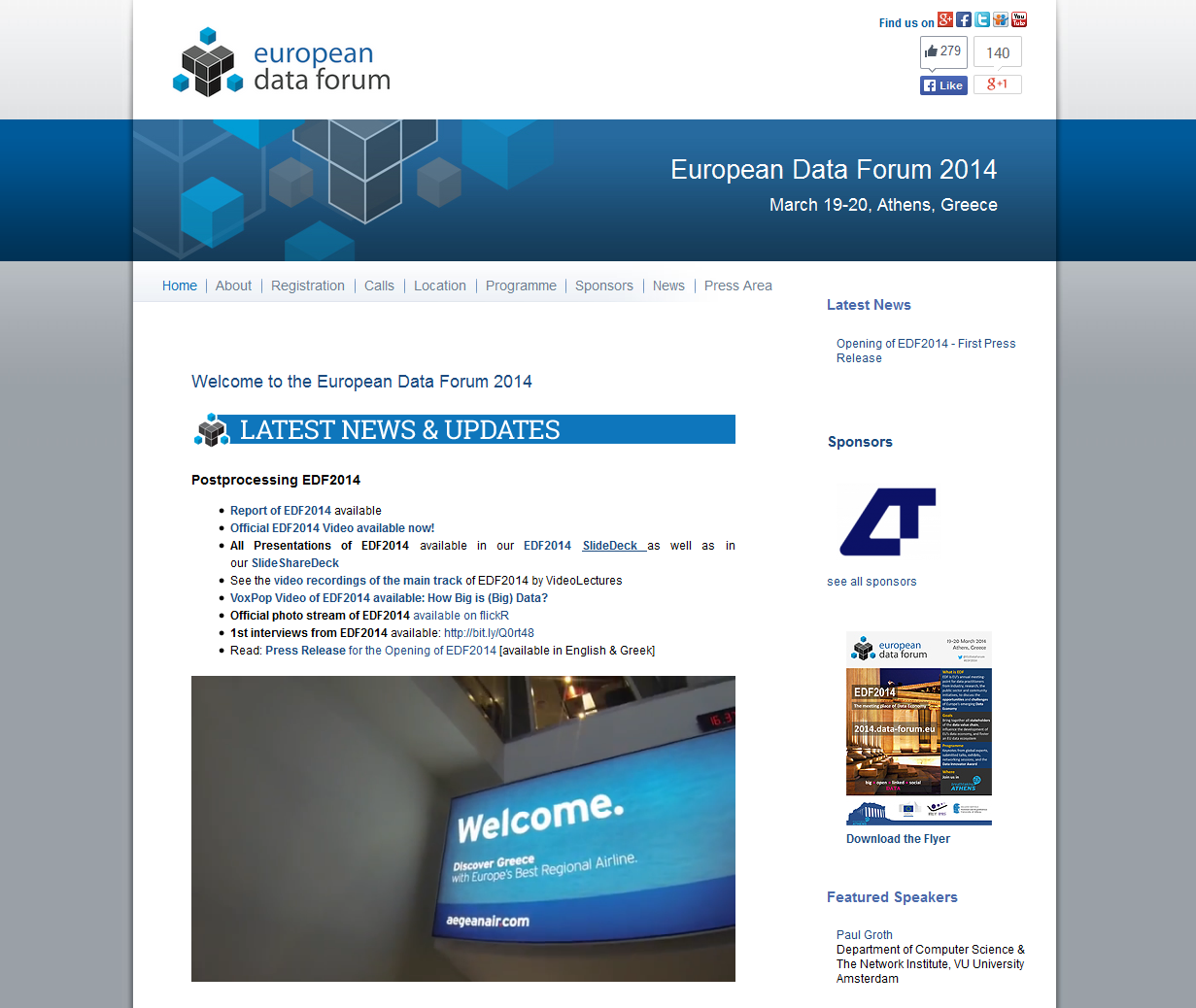 The EDF is the annual meeting-point for data practitioners from industry, research, the public-sector and community initiatives, to discuss the opportunities and challenges of the emerging Data Economy in Europe. The EDF 2014 comprises keynotes from global experts in the field, submitted presentations by participants, a panel and a 2-day exhibition. It concentrates on recent developments such as Open Data, Linked Data and Big Data and balances technical, application and socio-economic issues. The aim of the forum is to bring together all stakeholders involved in the data value chain to exchange ideas in order to strengthen the European data economy and its positioning worldwide. Discussions at EDF 2014 will also provide input to research, development, and policy activities at the European Commission (e.g., Horizon 2020) and those of the EU member states, with the aim of influencing the development of the new European data economy. 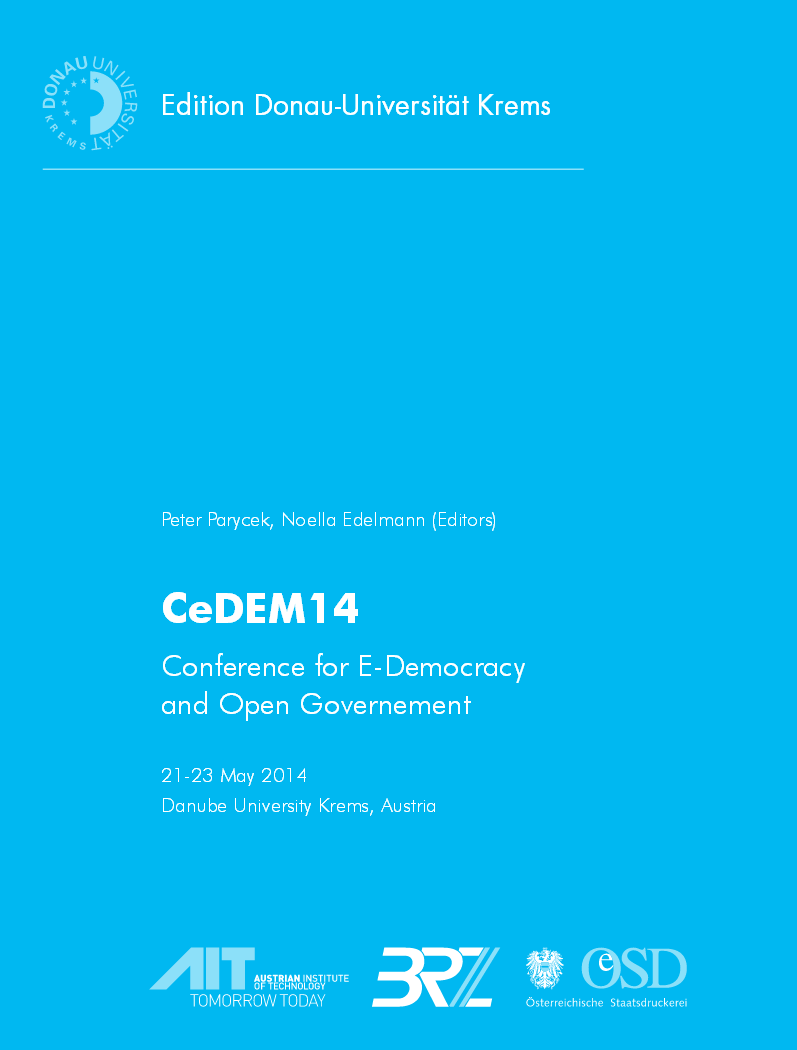 The international Conference for e-Democracy and Open Government brings together e-democracy, e-participation and open government specialists working in academia, politics, government and business to critically analyse the innovations, issues, ideas and challenges in the networked societies of the digital age. 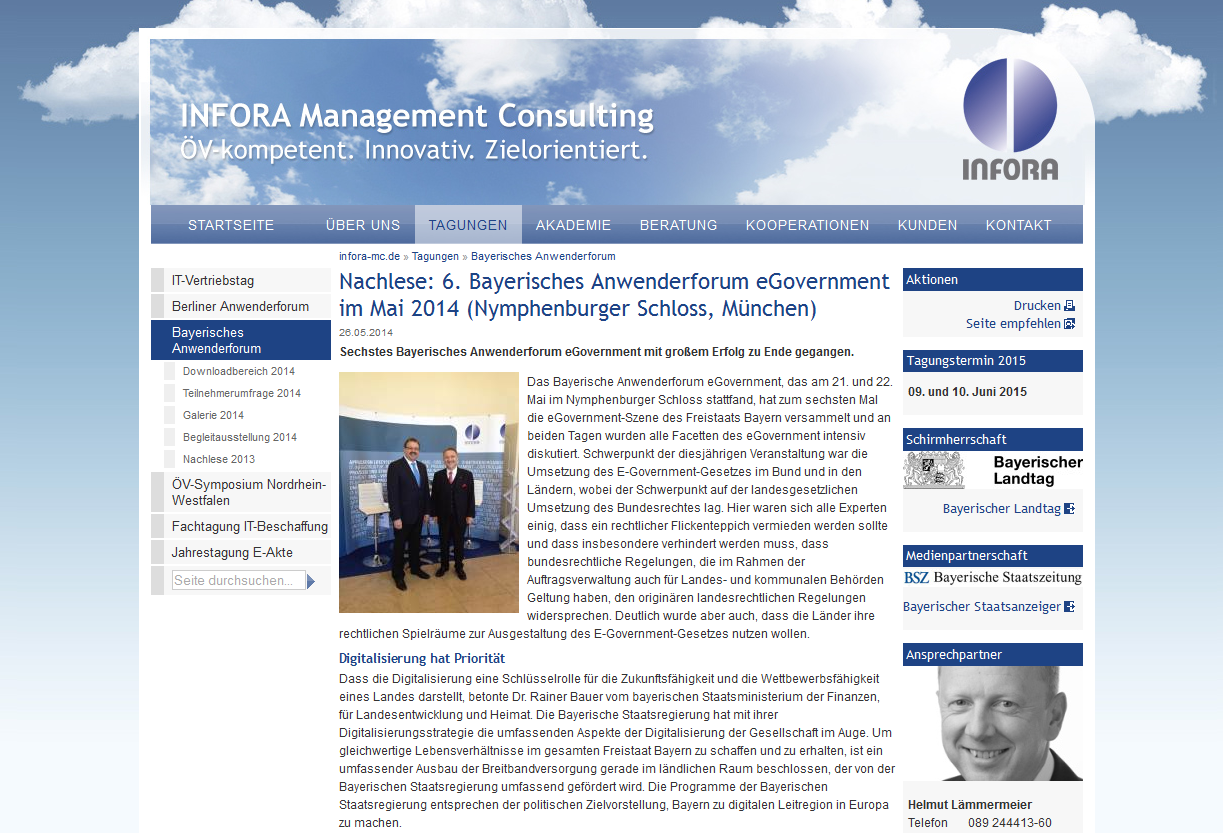 The „Bayerisches Anwenderforum eGovernment“ takes place on the 21st and 22nd of May at the Nymphenburger Schloss where for the sixth time the eGovernment community of Bavaria gathered. 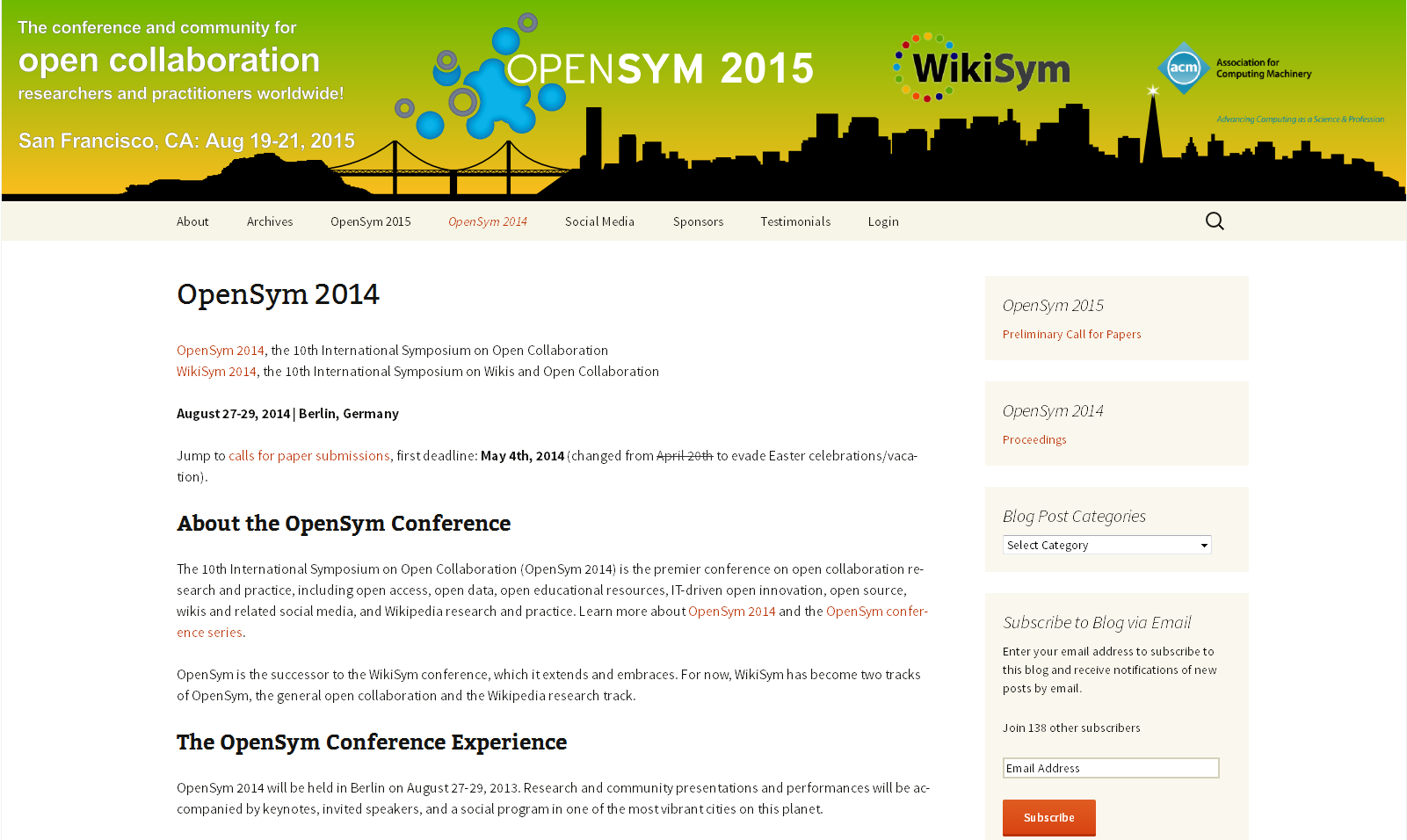 This year’s OKFestival is taking place in Berlin at the Kulturbrauerei, a large architectural complex originally built and operated as a brewery, with multiple brick buildings and courtyards. OKFestival will occupy one entire courtyard and the surrounding buildings to create a “city-within-the-city”, comprised of indoor and outdoor spaces. In our festival home, we’ll have the flexibility to arrange the areas to suit the programme – whether for discussions, workshops, brainstorming or demos.

The annual conference is the core activity of EGPA. It is held in a different European country every year. It is normally hosted by a member organisation. Each year, the theme selected for the conference is a topic of major concern for public administration in Europe.

The ODI Summit returned across central London in 2014 over two days, hosting a training discovery day, a conference full of world class speakers and the first ever Open Data Awards at our gala dinner.
The summit celebrated innovation and evolution of open data and its impact across cultural, economic, environmental and social spheres.
Speakers included our founders Sirs Tim Berners-Lee and Nigel Shadbolt amongst other open data luminaries and leading thinkers from business, the media, government, technology and startups.